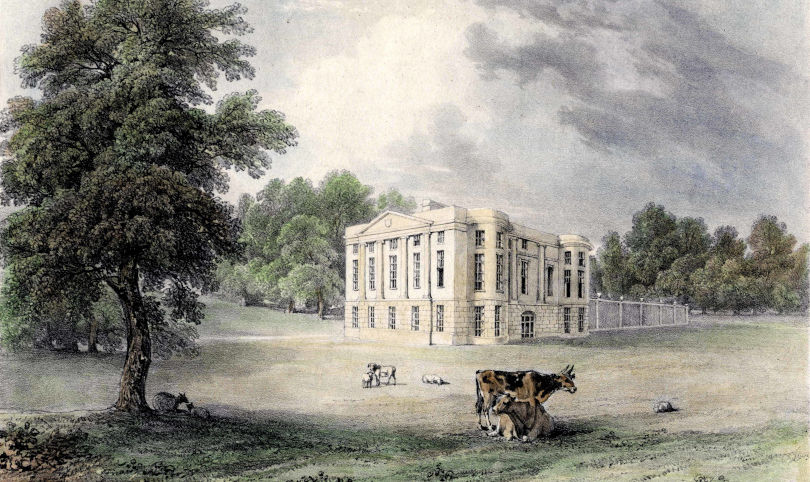 The commanding 1820 manor house – home to the American Museum – is probably the third building to have had the title. The first two were located in Claverton village, next to the church. The second version was built for Sir Edward Hungerford in c.1588 and designed, possibly, by John of Padua, who also worked in nearby Bradford-on-Avon. The manor, which included the house, the church, extensive land and vineyards was purchased by Sir William Bassett in 1608 and remained in his family for almost a century. In his Natural History of Wiltshire, the seventeenth century antiquarian John Aubrey, declared that Bassett “hath made the best vineyard” in all England.

150 years later, in 1758, Ralph Allen, the owner of the Bath stone quarries, purchased the manor; it had once been owned by his wife’s family, but a dispute between father and son had seen the estate sold. Unlike his fantastically modern and public house Prior Park, Claverton provided a romantic haven for Allen. The Manor passed by descent from Allen to his great nephew Allen Tucker. It was on Tucker’s death that the manor was purchased, in 1816, by John Vivian.

Vivian, a barrister, solicitor to the Excise, and a bencher of the Middle Temple, intended to renovate the sixteenth century property. His architect, Jeffry Wyat (later Sir Jeffry Wyatville) (1766-1840) however reputedly persuaded his client to build new, rather than restore. The decision to move the site of the dwelling may also reflect the contemporary taste for landscaped parks and natural vistas; the present position allows for wonderful views across the Limpley Stoke Valley, now a designated area of outstanding natural beauty.

A number of Wyat’s original neo-classical features can still be seen, such as the ox-skull plaster mouldings known as bucrania, the cast-iron banister, and the circular glass lantern light in the ceiling of the main hall. In fact no structural changes were made to the house during its conversion to a museum in 1958-61. Other elements survive too, many behind the period room sets, but the fireplace in the Museum’s Greek room, for instance, was incorporated into the Museum’s display.

George Vivian (1798-1873) inherited the manor in 1828. George was the second son, a great traveller, accomplished artist, and prominent patron of the arts. He carried out several alterations to Claverton Manor, including the addition of the top-lit picture gallery to the south wing in order to display his painting collection. Much of the garden layout that we see today was also undertaken by George Vivian. The museum’s Mount Vernon garden was the location of Vivian’s Italian-style garden and rose arcade which included spring-fed ponds and gravity-powered fountains. You can still see one of these fountains on the grass terrace above the Mount Vernon garden. The gates into this garden and the balustrade walling also date from this period. Other garden features created by Vivian include the grotto made from local limestone (now Grade II listed), and the curtain wall to screen the driveway from the garden.

In 1855 the house was let to James Wilson (1805-1860) who, according to his son, was ‘much attracted [to the building] owing to it containing a fine library and a very notable picture gallery, in which were paintings by Paul Veronese and Sir Joshua Reynolds’. Wilson, who had become Liberal MP for Westbury in 1847, was a businessman and journalist who had founded The Economist magazine in 1843. By 1855 he wanted to move from Westbury, because it had gone “Tory”!

The house stayed in the Vivian family until it was sold to Isaac Carr in 1869. The Times advertised the property in June that year with the following description:

“built …expressly for the owners, and regardless of expense, beautifully situate above the valley of the Avon and commanding delightful views over a most attractive county. The mansion contains noble entrance hall, a suite of lofty and elegant reception rooms; in all 20 bed and dressing rooms and every domestic arrangement, suitable for a large establishment; also extensive stabling, coach-houses, harness room, lofts, and rooms for men, kennels, etc…It is surrounded by undulating park, highly ornamental pleasure grounds, plantations, shrubberies and shrubbery walks, and rich hanging woods.”

After the Carrs it was sold to Henry Duncan Skrine, John Vivian’s great-grandson, in 1874. Skrine – of Warleigh – needed a residence above the mists of the Avon valley for his sick wife. On 26th July 1897, Skrine organised a fete for the Primrose League in the grounds. It was here that the twenty-three year old Winston Churchill made his first political speech.

The Skrine family continued to own the manor until the late 1950s, during that time it was let to various occupants. During the Second World War the manor became the headquarters of the Royal Air Force No. 32 (Balloon Barrage) Group. Stationed here was Squadron Leader Kenneth Horne who recorded the wartime radio programme ‘Ack-Ack, Beer Beer’ (service jargon for Anti-Aircraft Balloon Barrage). He later went on to do popular radio shows such as ‘Much Binding in the Marsh’ and ‘Round the Horne’.

In 1947 Bath City Council leased Claverton Manor as student accommodation for the Training College of Domestic Sciences, which provided qualifications for teachers in the domestic sciences, such as cookery, laundry work and needlework.