All tickets have now been sold for Sunday 27 June 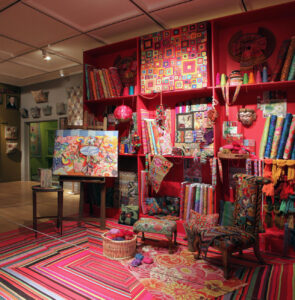 World-renowned knitwear and textile designer Kaffe Fassett returns to the American Museum in Britain in 2014 to celebrate his fifty years working as an artist and colourist. Born in San Francisco in 1937 and raised in the creative community of Big Sur, California, Kaffe has a long association with the American Museum, first exhibiting there in 1994. When he came to live in Britain in the early 1960s, Kaffe stayed in Bath and was much inspired by the Museum’s diverse collections – especially its many antique quilts. Kaffe was fascinated not only with the block patterns created in these textile masterworks, but also by their audacious use of juxtaposed colours and printed fabrics.

The Colourful World of Kaffe Fassett showcased how Kaffe lives by his maxim to find colour in a grey world. Designed by celebrated theatrical designer Johan Engels, the exhibition galleries were a blaze of colour with dazzling pieces on display. Over one hundred sumptuous works of textile art – a kaleidoscope of knitwear, needlepoint, beading, and quilts – were displayed in this dramatic exhibition alongside vibrant mosaics and still life paintings by Kaffe Fassett. Nearly all the objects on view are from Kaffe’s personal collection – the much-loved pieces that surround him as he creates. The cornucopia of works on view thus offered a glimpse of the private man behind the public façade.

The exhibition featured works spanning Kaffe’s creative life, including drawings he made as a boy in California. These monochrome pictures are a far cry from the explosions of colour that made Kaffe a household name from the 1970s as one of the great practitioners of contemporary craft. Visitors to the exhibition discovered coloured zones, each showcasing a variety of materials by colour, from knitted shawls to gorgeous coats inspired by Shakespearean heroines, and cushions decorated with his detailed needlepoint designs.

Having captivated generations and transformed the textile industry, it is only fitting that Kaffe – an American in Britain – should return to the Museum which so inspired him during those halcyon days in the early sixties. Complementing the exhibition were exquisite pen drawings that Kaffe made of the American Museum’s popular Period Rooms in 1964 on display in Claverton Manor. These delicate room portraits had not been exhibited to the public before and were a reminder that Kaffe began his career in the visual arts as a painter and illustrator. Four years after making these drawings, Kaffe went to Scotland where he became enthralled by the hand-dyed woollen yarns he discovered there. On the long train journey home, he persuaded one of his travelling companions to teach him to knit. The rest, as they say, is history – a captivating story of a life lived in colour, brightly celebrated at the American Museum during its 2014 season.

“This is the grandest show of my career – every item is part of an intricate opera of colour. I have always wanted this approach to my work, but other museum designers and curators have steered me to a rather mixed approach in my exhibitions. This show is so unique to me because it explains in a visceral way my growing obsession with the power of colour. My hope and conviction is that this exhibition at the American Museum in Britain will show the grey and beige clad young the sensual thrill of pure colour. I still feel vital! I want my message to come across in this mood altering show – I’m flying high on colour. This show is closer to my desires than ever before in my many, many presentations around the world.”